On 29th September 2022 the Mendelssohn-Gesellschaft of Berlin organizes a visit to the Castelli Romani, which will be divided into two different but connected moments: first a visit to the home of Luca Lombardi and his wife Miriam Meghnagi, during which Maestro Lombardi will talk about his work, his links with German culture and his relationship with Felix Mendelssohn’s music. There will also be pianists Alessandra Ammara and Roberto Prosseda, who will perform two compositions by Lombardi. This will be followed by a guided tour of Villa Falconieri in Frascati (a beautiful villa that was still owned by the Mendelssohn family in the 19 century), where Ammara and Prosseda, among the best Italian pianists of today, will perform a Mendelssohnian program that will also include the composition by Lombardi Mendelssohn im jüdischen Museum Berlin, dedicated to Roberto Prosseda, who performed it many times, after the world premiere, which took place in 2014 at the Jewish Museum of Berlin itself. 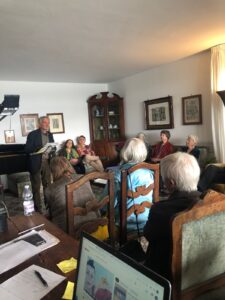 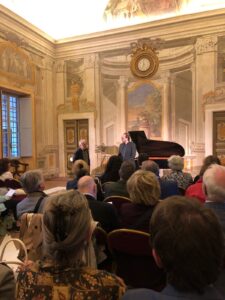 ← “The Evolution of Knowledge”
Ophelia-Fragmente →

Magnificent, I would say: memorable concert by Miriam Meghnagi with Alessandro Gwis at the piano, for the day of remembrance in Berlin (Italian Embassy - Berlin). Beautiful and important words by Giulio Busi on the fundamental role of the Jews in Italian history. ... See MoreSee Less

This website uses cookies to improve your experience while you navigate through the website. Out of these, the cookies that are categorized as necessary are stored on your browser as they are essential for the working of basic functionalities of the website. We also use third-party cookies that help us analyze and understand how you use this website. These cookies will be stored in your browser only with your consent. You also have the option to opt-out of these cookies. But opting out of some of these cookies may affect your browsing experience.
Necessary Sempre abilitato
Necessary cookies are absolutely essential for the website to function properly. This category only includes cookies that ensures basic functionalities and security features of the website. These cookies do not store any personal information.
Non-necessary
Any cookies that may not be particularly necessary for the website to function and is used specifically to collect user personal data via analytics, ads, other embedded contents are termed as non-necessary cookies. It is mandatory to procure user consent prior to running these cookies on your website.
ACCETTA E SALVA