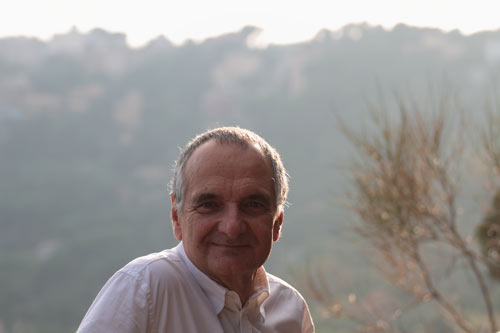 Luca Lombardi studied composition in Rome, Florence, Vienna, Cologne, Utrecht and Berlin (with Karlheinz Stockhausen, Bernd-Alois Zimmermann and Paul Dessau among others), and graduated from the Pesaro Conservatory under Boris Porena. He also graduated in German Language and Literature, and his doctoral dissertation on Hanns Eisler (with Paolo Chiarini and Fedele d’Amico as his advisors) was published by Publisher Feltrinelli Editore (Milan). He taught Composition in the Conservatories of Pesaro and Milan from 1973 to 1994, and has held lectures and workshops throughout Europe, United States, South America, Japan and Israel.

His scores are published by Schirmer, Moeck, Suvini-Zerboni, Ricordi and – from the beginning of the 2000s – Rai Com.

A selection of his writings was published in the book Construction of Freedom and other Writings, edited by J. Thym (Baden-Baden, 2006).

The monograph series on composers “Musik-Konzepte” dedicated a volume to his music (Munich, 2014).

His private archive (manuscripts, workbooks, diaries, correspondence) is housed at the Berlin Academy of Arts.

Lombardi is the recipient of several awards, including the SIAE Award for musical theatre (for the opera Faust. Un travestimento) and the Goffredo Petrassi Prize.

In 2015 the President of Germany Joachim Gauck awarded him the Order of Merit of the Federal Republic of Germany.

He is a member of the Berlin Academy of the Arts and of the Bavarian Academy of Fine Arts in Munich.

The creative life of very few composers can be said to mirror the evolution of such a complex and articulated period as the XX century, with its welter of styles and techniques in all the arts, including music. Luca Lombardi (Rome, 1945) is one of those few, his musical language being strongly characteristic of and entirely immersed in contemporary culture. In the early days, Lombardi had a passion for Stravinskij and Bartók. Then he studied composition in Rome, Vienna and Florence with Armando Renzi, Karl Schiske, Roberto Lupi and Boris Porena (under whom he graduated from the Conservatory of Pesaro in 1970). Between 1968 and 1972 Lombardi made his first contact with the avant-garde movement, especially through Karlheinz Stockhausen, Bernd-Alois Zimmermann, Henri Pousseur, Mauricio Kagel, Frederic Rzewski, Dieter Schnebel and Vinko Globokar, all of whom he studied with in Cologne. During these years, Lombardi’s strong interest in politically committed music brought him into contact with Hanns Eisler and Paul Dessau. He wrote his doctoral dissertation on Eisler (University of Rome, 1975. Tutors: Paolo Chiarini and Fedele d’Amico) and studied with Dessau in Berlin, where he had moved to work on his thesis.

Both Eisler and Dessau had worked with Bertolt Brecht and represented for the composer alternative and complementary models to the already existing avant-garde movement. Years later (in 1982) Lombardi explained this coexistence of different styles in his work through the concepts of “ex-clusive” (the possibility of creating complex forms from very limited materials) and “inclusive” (the willingness to include multiple musical “behaviours”). In 1973 Lombardi began teaching composition at the Conservatory in Pesaro, then he moved to the Milan Conservatory in 1978, where he held a position until 1993, after which he decided to become a full-time composer. A full agenda of lectures and seminars has taken him throughout Europe, the United States, Canada, Latin America and Japan. Many of his compositions were commissioned by important Italian and foreign institutions, amongst which are Ircam (Paris), WDR (Cologne), Rikskonserter (Stockholm), Radio-Symphonies-Orchester (Berlin), Musikbiennale (Berlin), Rai (Rome and Turin), Radio della Svizzera Italiana (Lugano), Basler Theater (Basel), KölnMusik (Cologne), Saarländischer Rundfunk (Saarbrücken), Hindemith-Institut (Frankfurt am Main), Frankfurt Feste (Frankfurt am Main), Wiener Festwochen (Vienna), Oper Leipzig (Leipzig), ORT-Orchestra della Toscana (Florence), Essener Philharmonie (Essen), Rudolf-Steiner-Archiv (Dornach, Switzerland), Staatstheater Nürnberg (Nuremberg), the Rome Opera House and La Scala in Milan. In 1988-89 he was a fellow of the Institute for Advanced Study in Berlin, and in 1998-99 and 2003-04 at the same Institute in Delmenhorst. He has received several prizes and awards, including the “Goffredo Petrassi” Prize in 2006, and is a member of the Berlin Academy of the Arts. In the past he has published with Schirmer, Moeck, Suvini-Zerboni and Ricordi, and is currently publishing with Rai Trade. Many of his writings are brought together in the volume Construction of Freedom and Other Writings, edited by Jürgen Thym (Baden-Baden, Valentin Koerner Verlag, 2006). Together with Walter Gieseler and Rolf-Dieter Weyer, he co-authored a treatise on orchestration, Instrumentation in der Musik des 20. Jahrhunderts. Akustik. Instrumente. Zusammenwirken (Celle, Moeck Verlag, 1985). Although his catalogue includes a vast list of solo, chamber and orchestral music, Lombardi has become increasingly drawn towards opera since the mid-1980s, when he wrote Faust. Un travestimento (1986-90). This opera sums up the composer’s many stylistic peculiarities, showing his effortless mastery of expressive means and a remarkable theatrical instinct. With the contribution of a libretto by poet Edoardo Sanguineti, the opera constantly shifts from serious to comical, alternating unconventional quotation and drama. Three more operas followed: Dmitri oder der Künstler und die Macht (1994-99), Prospero (2005-2006) and Il re nudo (2007-2008), his first true comic opera. Over the years, Lombardi has progressively brought to a synthesis his many different musical experiences, yet with a clear reference to the great tradition of music: Beethoven (whom Lombardi considers the most “human” of the great composers of the past) to Stravinskij, Bartók and Šostakovič and, as far as the opera is concerned, to Rossini, Verdi and Puccini. However, never from a nostalgic or retrospective point of view: Lombardi’s feet remain firmly rooted in contemporary culture. He lives in Marino (Rome) and Tel Aviv. — Gabriele Becheri

Luca Lombardi, born in Rome in 1945, is considered one of the most prominent and note-worthy representatives of Italian music of his generation. Over the past forty years, he has shaped his creativity through a continual process of research, questioning and renewal. By addressing the social and political issues of his time, his work is pervaded by a kind of humanism that makes him a worthy successor to his colleagues Dallapiccola and Nono. Lombardi’s catalogue (150 titles thus far) shows mastery in handling different stylistic elements, whereby his musical language largely results from the tasks and themes he confronts. A musical language that ranges from expressive lyrical quality to bursts of energy, from meditative contemplation to estrangement and deconstruction, always with flashes of wit and irony.

Lombardi attended the German gymnasium in Rome and, since the mid-1960s, has been a mediator between German and Italian culture. His composition teachers included Armando Renzi and Roberto Lupi in Rome and Florence, Karl Schiske in Vienna, as well as Bernd Alois Zimmermann and Vinko Globokar in Cologne. He took part in Karlheinz Stockhausen’s Cologne Courses for New Music, studied electronic music in Cologne and Utrecht, and then became a student (Meisterschüler) of Paul Dessau in Berlin. In 1975 he graduated from the Rome University with a dissertation on the music of Hanns Eisler. He started teaching composition in 1973, serving at the Conservatory in Pesaro until 1978, and then at the Conservatory in Milan until 1993. The author of numerous essays and several books on musical and philosophical issues, Lombardi has been invited to lecture and teach courses in Europe, Japan, the US and Latin America. He spent long periods in Germany as fellow or guest of several prestigious Institutes (Berlin Institute for Advanced Study, Künstlerhof Schreyan/Lower Saxony, Delmenhorst Institute for Advanced Study). He is the recipient of many awards and recognitions, including the Goffredo Petrassi Price in 2006. Lombardi’s work (published by Moeck, Schirmer, Suvini Zerboni, Ricordi and RAI Trade) includes three operas: Faust, un travestimento (libretto by E. Sanguineti after Goethe’s Faust I); Dmitri oder der Künstler und die Macht (libretto by H.-K. Jungheinrich), and Prospero (libretto by F. C. Delius and L. Lombardi after Shakespeare’s Tempest), three symphonies, several oratorios and orchestral works, as well as chamber music cycles (Sisyphus) and works for varied ensembles. His catalogue also features many vocal works. Most of his compositions were commissioned by such important institutions as IRCAM (Paris), WDR (Cologne), Saarländischer Rundfunk (Saarbrücken), Radio DDR (Berlin), RAI (Rome), Radio della Svizzera Italiana (Lugano), RSO (Berlin), Musikbiennale (Berlin), Kölnmusik (Cologne), Frankfurter Feste (Frankfurt), Wiener Festwochen (Vienna), Rikskonserter (Stockholm), Basel Opera House, Leipzig Opera and the Nuremberg Opera Theatre. — Michael Kurtz

About the series:
As an extension of the World Music Heritage Series conceived and produced by maestro Bhai Baldeep Singh for Anād Records, the YaarAnād Virtual Baithak Series aims to celebrate excellence in the field of music, arts, dance, theatre, and literature. The YaarAnād Virtual Baithak Series marks the 550th birth anniversary Gurū Nānak Dēv, the first Gurū of the Sikhs. ...